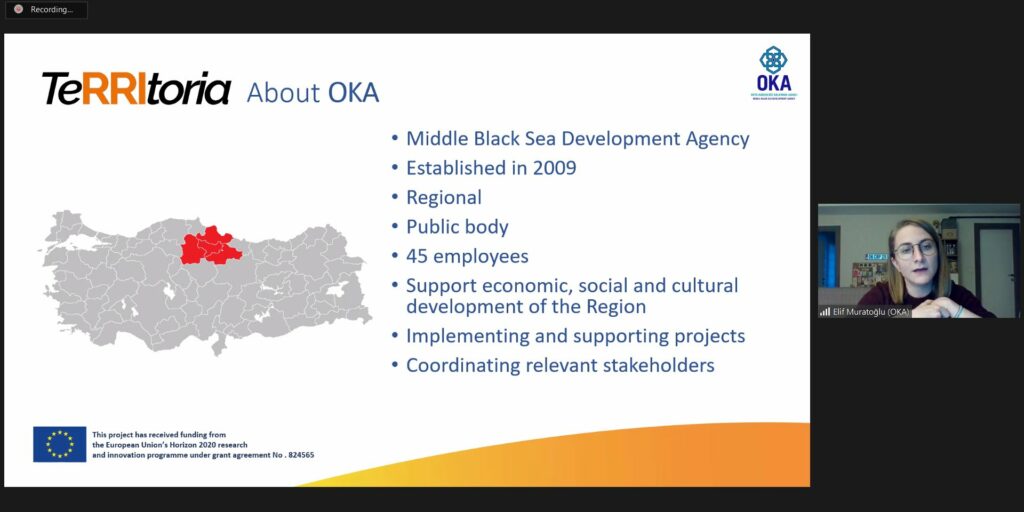 The Region of Middle Black Sea, composed of four main cities (Amasya, Corum, Samsun and Tokat), has 2.8 million inhabitants and produce 2.13% of the national GDP.  The middle Black Sea Development Agency (OKA) was established in 20009 and, as a regional development agency (RDA), it supports the economic, social and cultural development of the region. Since its creation, OKA has implemented 963 projects for 913 million TL investments on social innovation, health industry and tourism. It is currently involved in 13 EU-IPA projects.

The idea behind the OKA strategy is that a region cannot achieve good interventions across all sectors. A clear prioritization strategy must be devised. Based on the TR83 Regional Innovation Strategy prepared by OKA in 2013, the future TR83 Smart Specialisation Strategy is aimed to be re-prepared by following global developments. The regional innovation ecosystem of OKA is composed of 4 main areas: public institutions; private sector; intermediary institutions, NGOs and local public; and universities, educational institutions, test and research centers. Thanks to the innovative and entrepreneurial society together with its competitive sectors, Middle Black Sea Region hopes to become a pioneer region for development at national and international level in 2023.

OKA set some strategic goals for the near future: increase the innovation performance of private sector and increase entrepreneurship based on innovation; strengthen R&D and innovation infrastructure and human resources; and encourage and disseminate social innovation and innovation in public services.

In order to prepare the new S3, OKA staff carried out a field research methodology. Three different target groups were identified: NGOs and stakeholders, opinion leaders; production companies; and service companies. In total, more than 260 SMEs and 40 organisations replied to the survey prepared by OKA.

The staff of OKA also developed a PESTLE methodology: Political Economic Social Technological Legal Environmental (PESTLE). More than 200 leading representatives of the regions contributed to it. They provided feedback on the result of the field research methodology.

In the new S3, some priority sectors have been identified. Since the region is composed of four main cities, the S3 reflects this approach. In fact, in the city of Amasya the niche sector is tourism, in Corum it is machine and equipment manufacturing, in Samsun it is architectural and engineering activities while in Tokat it is manufacturing of food products. These niche sectors are contributing to the growth and development of other sectors which are currently not so dominant.

Talking about the regional context, OKA staff identified 3 main priority sectors: agri-food, future engineering and blue economy. Tourism and smart city are two new emerging sectors which will be a determinant in the near future.

Despite the fact Turkey does not belong to the European Union, OKA decided to develop its own S3. OKA considers the S3 strategy as a regional planning document useful to plan the development of the region. In this way, they are focusing only on 3 main sectors and probably in the future they will dedicate more resources to the two emerging sectors already identified. The process already started in 2013 because they had plenty of resources but they did not know how to use them properly in order to boost the economic growth of the region.

As a consolidate tradition, EURADA invited one panelist coming from a development agency which is an expert on the topic of the day. This time the panelist was Nalan Tepe-Şençayır, an environment engineer who is working as a planning specialist at BEBKA Regional Development Agency, a Turkish member of EURADA.

Nalan is involved in the Smart Specialisation Strategy process for BEBKA. The process started in 2019 and despite the fact that they have many aspects in common with OKA, they also have some differences. The innovation and R&D ecosystem of OKA is stronger because they established a governance structure with some councils where stakeholders are involved. The Governing Council of TR83 is playing a crucial role because in this way all the actors are involved, and they can have a say. At BEBKA, they identified some priority areas for their S3 and they also have some focus areas under these sectors in order to be as specific as possible. EDP is the core of the S3 and Turkish RDAs are slowly developing it by respecting the peculiarity of each Turkish region. OKA created the “U40 Entrepreneurial Discovery Team” which is a participatory process of involvement role in establishing focal point areas of intervention.

Nalan pointed out to how important it is for Turkish development agencies to be involved in European projects. Turkey is the largest beneficiary of EU support among countries that aim at becoming a member of the European Union. The enlargement of the EU is a gradual and carefully managed process and new members can only join when all the EU requirements are met. EU financial assistance brings candidate countries closer to the Union’s rules, policies and standards, and thereby provides a better quality of life for their citizens.

The presentation from Elif Muratoğlu, the contribution from Nalan Tepe-Şençayır and some clarification from Ibrahim Ethem Şahin (Secretary General of OKA) created the possibility of a vibrant discussion among Turkish and European RDAs. Several development agencies based in Europe were curious about the process adopted by the Turkish colleagues.