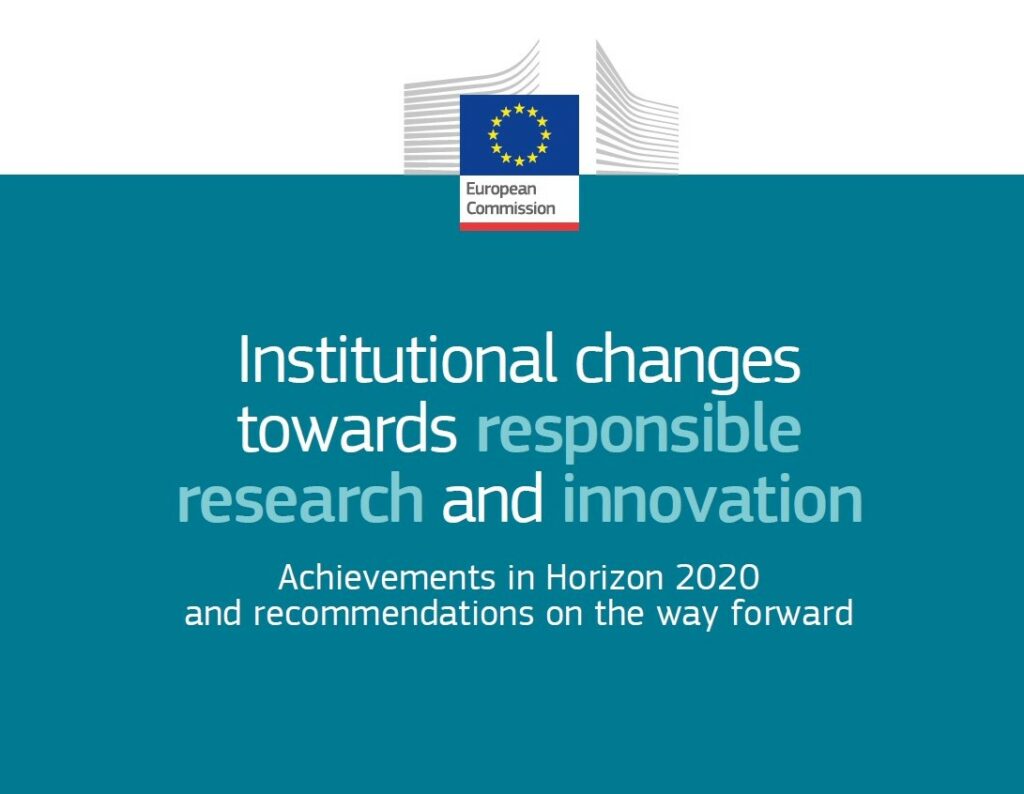 Report on the progress of Responsible Research & Innovation agenda

The European Commission has released a series of reports on the progress of the Science with and for Society (SwafS) programme under Horizon 2020, among them one specifically focused on Responsible Research & Innovation (RRI). This report goes into depth on the achievements of Horizon 2020 RRI projects, including mentions of TeRRItoria itself.

First, a look at SwafS in general. Dating all the way back to a working paper in 2000 which kick-started a debate on Science, society and the citizen in Europe, the key aims of today’s modern SwafS agenda are to “build cooperation between science and society, recruit new talent for science and pair scientific excellence with social awareness and responsibility”. Following on from this, it should be noted that:

Now regarding RRI specifically, it is worth reminding ourselves of its origins too. Being a product of the Science in Society agenda (a precursor to SwafS), RRI was officially enshrined in the Rome Declaration on Responsible Research and Innovation in Europe in late 2014. Since then, it has been actively and purposefully pursued by projects such as ours. The idea has proven popular, seeing a good level of uptake. The number of RRI projects as of mid-July was 35, including 23 currently running ones and 12 which have already concluded. Another 12 RRI projects are projected to be started under Horizon 2020 before its end, bring the total to 47.

The exact focus of the SwafS programme, in terms of the topics it seeks projects to respond to, has evolved over the past financing period. This resulted in the “strategic orientation” of Building the territorial dimension of SwafS partnerships being adopted in the Work Programme of 2018-2020. This, logically, included the SwafS-14 call through which TeRRItoria was funded; Supporting the development of territorial Responsible Research and Innovation.

Achievements of RRI so far

So what have the overall achievements of the RRI community been so far? First, it would make sense to define how success is measured. In the case of SwafS projects, as outlined in the Horizon 2020 indicators overview, the Key Performance Indicator is Number of Institutional change actions promoted by the programme. The report looks at these in a good degree of detail, first clarifying them as being “a change to how a beneficiary governs or structures itself”, or to say it in more detail:

“It is expected to have meaningful impact within the institution concerned and intended to last beyond the lifetime of project funding. Moreover, institutional changes towards RRI concern one or more of the EC’s five dimensions of RRI (public engagement, open access, gender, ethics, science education), or manifest as an ‘RRI package’ covering all of these five dimensions.”

And the results are in; so far, as of the report’s release, a total of 238 institutional change actions had been or were in the process of being implemented by RRI-focused projects. This is to be compared to a target of 100 institutional changes, which it far outstrips.

Institutional changes which TeRRItoria is working to implement include establishing Gender Equality Plans within their institutions, incorporating RRI principles into the Smart Specialisation Strategy of their region, and establishing dialogue between citizens and the R&I sphere, including engaging residents of less populated and prominent regions who are often overlooked.

To view the report in full, please click here. See section 2.3.3 (pages 31-33) for an overview of what territorial RRI projects like TeRRItoria have been and will be working on.

To view other similar reports on other SwafS topics, please click here and locate the post from 20th of July 2020.

Image and quote used courtesy of European Commission Directorate-General for Research and Innovation under Creative Commons License CC BY 4.0.