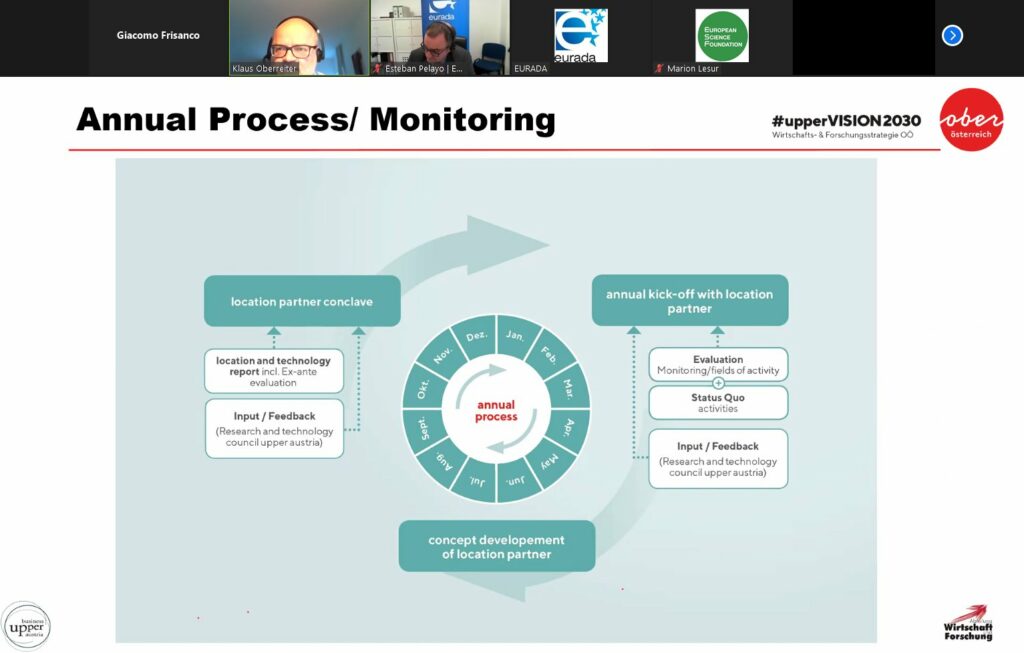 On Thursday the 19th of November 2020, TeRRItoria began a new series of events on the topic of Responsible Research and Innovation (RRI) and how it can be applied at regional level. These events are due to take place on a monthly basis, on the third Thursday of every month. For the first instalment, the subject was the new Smart Specialisation Strategy (S3) of the Regional Development Agency of the region of Upper Austria, Business Upper Austria – OÖ Wirtschaftsagentur GmbH.

To begin the event, the Director of EURADA, Esteban Pelayo introduced the event and some basic facts about Upper Austria. To offer some context and stress the region’s importance, Esteban pointed out that the it contains only around 16-17% of Austria’s population, but represents around a quarter of national industrial GDP and one third of the country’s exports.

After this, the stage was given to Mr Klaus Oberreiter, responsible for policy & location strategy of Business Upper Austria. He described how Upper Austria introduced its first “Strategic Programme” as far back as 1998. Since then, the region has progressed through 4 different such strategies before developing the latest and current one, #upperVISION2030.

Klaus stressed that the agency tried to have a broad, bottom-up approach when making this S3. Their starting point when designing the Strategy was to make a strategic framework for activities with a clear focus, rather than just a basic thematic framework for the allocation of funds. As Klaus describes it, a strategy which contains all of the key words of what the region is focussing on makes it easier to gain funding from central government by allowing the central authorities to check that document for key words to make sure that their priorities line up. In this way, it serves as a shortcut for them.

One quite fundamentally new aspect of this Smart Specialisation Strategy was how they approached stakeholders (such as research institutions, companies, and universities). Mr Oberreiter stressed how they previously always used to ask them what their agency should do based on their activity fields, often resulting in an idealistic wishlist. In contrast to that, when planning the latest S3, they instead asked the stakeholders what the stakeholders could do for the regions. In this way, they changed the mindset that education, industry, and government had had over the previous decades. Changing this was not easy, he stressed, but allowed for the Strategy to be approached in a more revealing way.

Klaus also mentioned how around 75% of all R&D expenditure in Upper Austria comes from companies, including small ones, an exceptionally high share compared to the national average of only 48%.

Their focuses in the S3 were defined by collecting a large batch of 61 trends in the region and analysing them against multiple different criteria to gradually eliminate many until only the 4 most significant ones remained, to form the 4 fields of activities of regional importance.

The agency set up a multi-layered working structure consisting of 4 onion layers, from inside to outside: a Strategy Group, a Steering Group, an Operational Group, and a Reflection Group. An important point he placed emphasis on here was the importance of working together with external partners in the early stage, since they bring another perspective that one cannot get when always discussing with the same people from within the region.

The region also pursues Workplace Upper Austria 2030, a strategy for ensuring the region has sufficient skilled labour. This includes those trained there, those already there who can be activated to work in more skilled fields, and those who may be attracted from outside to move there and settle.

Perhaps one of the most intriguing points highlighted in the presentation was about how Business Upper Austria undertakes regular discussion of the activities set out in the S3. On a yearly basis, the agency enters discussions with regional actors to hear how the activities are going. In such conversations they find out if the stakeholders are ok with the number of and the level of activities and if there is anything they think is missing. Monitoring these things on a yearly basis means that advantageous changes or adjustments which the agency could make do not have to wait up to 5 years until the next S3 starts being developed but can potentially be addressed within a year. After every such yearly consultation, they look in depth at whether the measures, activities, and calls that they promote are correct. They also hold a yearly “location partner conclave”. At this meeting, they discuss whether things are on the right track.

After Mr Oberreiter’s presentation, the first panellist of the day took the stage to give comments. This was Carmen Sillero, Head of S3 Strategy at IDEA, the Regional Development Agency of Andalusia, Spain. She commented on the importance of the robustness of the S3 strategy, as well as its long-term view, its technological focus, and the fact that human capacities are so central to it. She also found the paradigm shift in how the region asked its stakeholders “What can you provide to the region?” to be very wise. In response to this, Claus stressed again that changing this traditional mindset, by which stakeholders expect to be asked what they want to see, was extremely difficult.

On the topic of Public Engagement, an RRI key about which a question was asked, Mr Oberreiter stressed Business Upper Austria’s connections to the civil society helix through the extended networks of their clusters, as well as a high level of awareness of the region’s industrial nature and communication of its activities, including the fact that they are very open when in contact with societal actors.

For more information on the #upperVISION2030 strategy, please visit its dedicated website. The PowerPoint presentation of Mr Oberreiter may be downloaded at the following link. The entire event may be viewed online at any time by simply following this link. The next instalment of the #ResponsibleRegions webinars will take place on Thursday the 17th of December and more information on the speakers will be forthcoming soon on the TeRRItoria website and Twitter account.