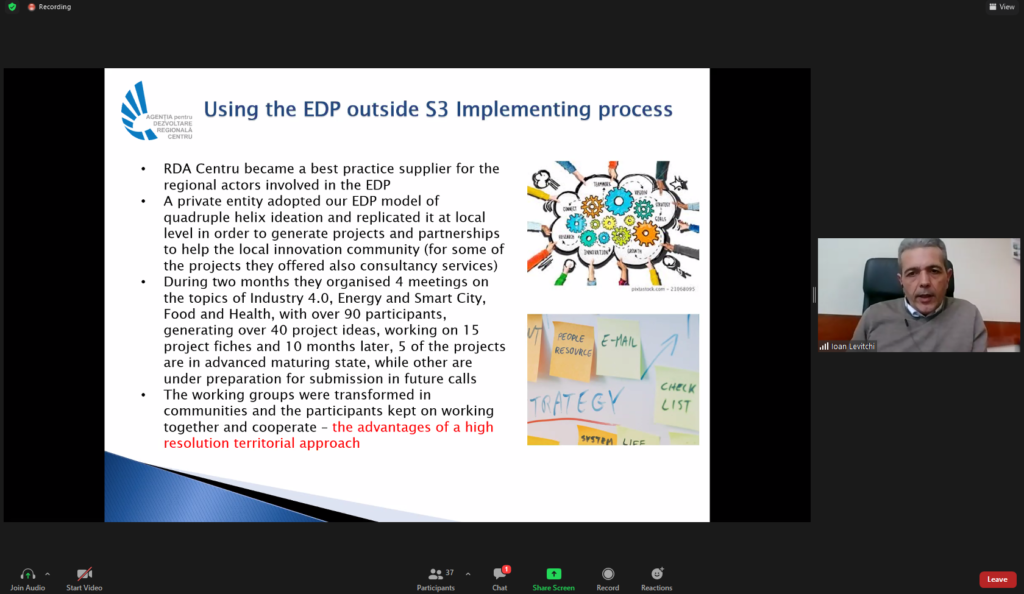 The TeRRItoria consortium’s second event for 2021 was the fourth dialogue of #ResponsibleRegions, held on Thursday the 18th of February. During this event, Ioan Levitchi of the Romanian Regional Development Agency ADR Centru presented the “Entrepreneurial Discovery Process as a tool for engaging citizens and companies”.

Ioan opened his intervention with an account of his experience learning how to use and put in place the Entrepreneurial Discovery Process, as he stressed that at the beginning it can be difficult to get to grips with. Since he started working on the Smart Specialisation Strategy (S3) for the Centre Region of Romania in 2014, he and his teams have used the EDP process to accompany their smart specialisation efforts.

But the S3 approach can also be used outside of the S3 implementation process, as he showcased with an example from his region. This involved a private entity, a consultancy firm, adopting ADR Centru’s EDP model of Quadruple Helix ideation and replicating it at local level to generate projects and partnerships in their own local innovation ecosystem. This resulted in multiple local initiatives, to which ADR Centru took a laissez-faire approach to see how they would organically develop. At the end of this process, the EDP local organiser (the private entity) provided all of the results to ADR Centru, which then allowed some of those locally developed projects to be included in the region’s RIS3 Project Pipeline. This highly innovative projects include new solutions to challenges brought on by the Covid-19 pandemic.

These different initiatives allowed the creation of different local Knowledge Innovation Communities in the region focused on different topics such as energy, manufacturing, food, and urban mobility. There is even a new one on the way to be created focusing on the cultural industry.

The local character of the innovation community that came out of this seems to have contributed to the community’s ability to continue cooperating, even after the point when one might have expected to see interest in it drop off.

For him, the local character really seems to be one of the main drivers of the realisation of the Knowledge Innovation Communities and EDPs, something which was later confirmed by the two invited panelists.

With the event’s first panellist, Nathalie Boulanger (Head of the Department for European Policies & Innovation at DEV’UP, the Regional Development Agency of Centre-Val de Loire), the discussion moved on to why ADR Centru did not act as the moderator of the EDP process which was going on and instead chose to allow it to be driven by the private entity. To this, Ioan stressed that the intention with that was not for ADR Centru to be less involved in the EDP process, but rather the situation was something which developed naturally and which they decided to go along with.

James Wilson of Orkestra, the Basque Institute of Competitiveness, stressed that ADR Centru’s experience fits in with some other experiences that he has studied together with the JRC when analysing 18 different EDPs. He stressed that multi-level approaches to EDP have generally proven a challenge for implementors and found it highly interesting that ADR Centru, in what they achieved, seem to have solved that issue to a good degree. He also pointed out that civil society is a part of the equation which, in almost all of the cases he has studied, has proven to be the weakest link in terms of its involvement in the EDP.

These two interesting interventions allowed for an exchange between Ioan, Nathalie and James about the difficulty of finding people representing civil society’s interest only. And even when they are found, they tend to have a habit of challenging the establishment and being demanding. The dialogue was concluded on the fact that the involvement of civil society is extremely important either way, as they are ultimately the “users” of the end results. It was pointed out that in the Centre Val de Loire, they have a citizen council that is involved this process.

The dialogue was also an opportunity for a couple of interesting readings recommendations from specialists in the audience, which are repeated here:

Below you can find the video of this fourth dialogue :