#ResponsibleRegions dialogue – Implementation of RRI keys through a digital transformation of territories: the example of Grand Est and DigiTeRRI 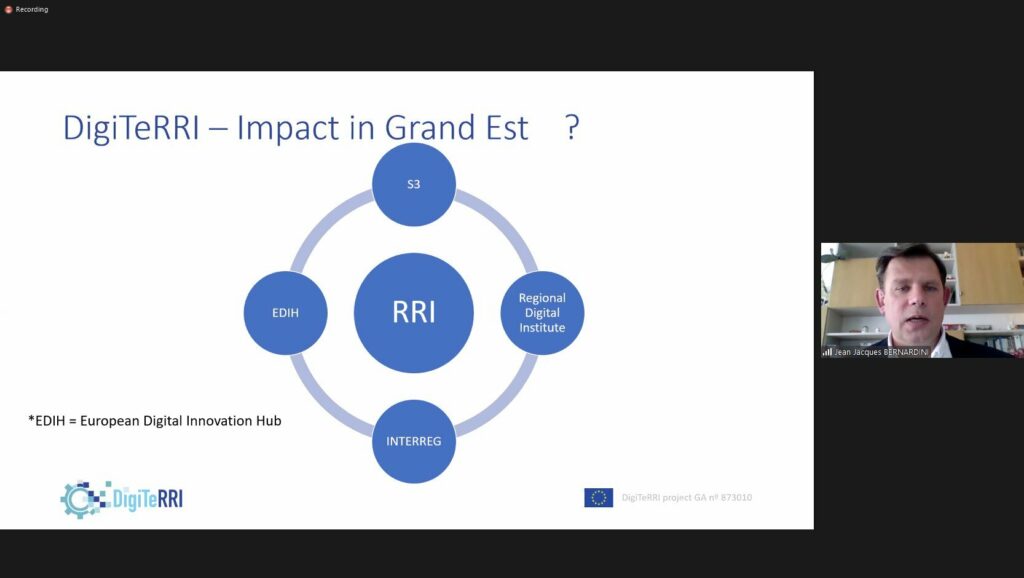 ResponsibleRegions dialogue – Implementation of RRI keys through a digital transformation of territories: the example of Grand Est and DigiTeRRI

In the framework of TeRRItoria, the fifth #ResponsibleRegions dialogue was held on the 18th of March 2021. The topic for this instalment was the implementation of RRI keys in the digital transformation of territories. Academics and experts on economic development discussed the implementation of responsible research and innovation in practice with Mr Jean-Jacques Bernardini of Grand E-Nov+, the regional development agency of the region of Grand Est, France.

Mr Bernardini began his intervention by presenting his development agency, then proceeded to share the main results of the RRI project they work on, DigiTeRRI, and how these results are applied in Grand Est to ensure ethics, inclusiveness, and open data.

As Mr Bernardini explained, DigiTeRRI a H2020 project which gathers 12 partners from 5 countries looking to elaborate a framework and develop a roadmap for the transition of traditional industry regions into digitalised, industrial, self-sustaining R&I ecosystems by using a Responsible Research and Innovation (RRI) approach. Jean-Jacques Bernardini placed emphasis on the project’s goals of addressing the complexity of the challenges in interplay between the quadruple helix actors in the different territories. These challenges are for him very important as digitalisation is today unavoidable and represents a big opportunity for developing territories and helping its actors from the different parts of the Helix. Jean-Jacques Bernardini insisted on the fact that developing a shared vision for the territory is at the heart of DigiTeRRI and the strategy that it conveys.

As concerns Grand Est’s digital strategy, the objective was to accelerate the industry’s digitisation through identifying bottlenecks, defining action plans, implementing actions (through technical assistance, funding programs, training, etc.) and focusing on AI, cybersecurity and high-performance computing. A strategy that was implemented through different programs (S3, E-DIH, Regional Digital Institute, INTERREG) while taking in consideration RRI keys, such as relating KPIs to RRI, gender equity, inclusion, ethics objective for programs, and cooperation with the different stakeholders involved and impacted by the programs.

Following the presentation, the intervention of Dr Christoph Schneider, a researcher of the Institute for Technology Assessment and Systems Analysis of KIT Karlsruhe allowed a discussion on the similarities between the visions of digitalisation of Grand Est and of Baden-Württemberg, as well as digitalisation as a way to overcome the economic crisis. Christoph Schneider also pointed out the need to better exploit the many new data available thanks to the Open Data movement in order to create added value at regional level.

Then, Daniel Janeiro of ADRAL and Director of the incubator EvoraTech, insisted on the need to bring in more innovation at local level and explained how important the preservation of talent in regions with traditional economies was. Mr Bernardini answered to this that the pandemic may in some respects have a positive impact by encouraging people to leave Paris and the capital region to move back to their home regions where cost and quality of life are better, bringing back quality employees to the regions, underlining the potential revolution that it could be for “smaller” territories in the future.

Finally, Antonio Romero, the head of the innovation department of INFO Murcia, the development agency of the Spanish region of Murcia, explained the relevance for agencies of gathering all competences to develop a territorial vision. In this case, the digitisation of the territory considers the quadruple helix, especially with the deployment of tools to engage citizens and the society in general. This allowed Jean Jacques to develop on the fact that intermediaries play a crucial role in facilitating dialogue between public institutions and civil society. He concluded on the fact that, when training young people, the teacher should always be up to date as otherwise they will end up providing the trainees, who are already outside the labour market, with outdated skills.

These different exchanges allowed for a comment in the chat from Finland highlighting the problem of the “digital divide”, given that it was observed there that digitalisation increases the threats of “global sourcing”. It was also noted that “big” companies are using digitalisation more in relation to customers than “small ones” that tend to use it only as a process to improve internal production processes.

Below you can find the video of this fifth dialogue: