The Nordland case in SeeRRI: an approach to co-creating regional planning strategy 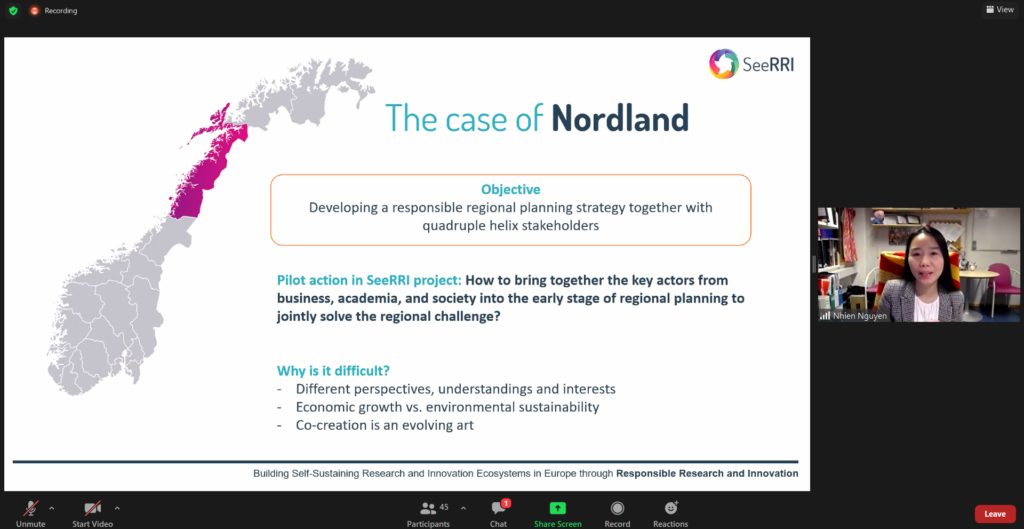 The Nordland case in SeeRRI: an approach to co-creating regional planning strategy

The first event organised by the TeRRItoria consortium in 2021 was the third dialogue of #ResponsibleRegions. On Thursday 21st January, Nhien Nguyen illustrated “The Nordland case in SeeRRI: an approach to co-creating regional planning strategy”.

Nhien talked about some different ways to view RRI: one through the prism of the RRI keys and another through the lens of the RRI dimensions. These are anticipation, reflexivity, responsiveness, and inclusiveness. She believes that the stakeholder workshops should not be used for lecturing the regional actors about RRI which is an abstract framework for them. What should be done, she says, is to put RRI into action. It is thus not about explaining RRI to stakeholders, but rather about putting it more in context for them.

She presented regional planning as a wicked problem, complex with no clear solution and “no right to be wrong” for the planner as the choices made for the regional planning will have consequences.  Nhien pointed out that a mistake commonly made in regional planning is focusing on the best option available for the future, as in actual fact scenario planning is needed in order to develop a strategy that will remain viable in the event of any of the possible scenarios becoming reality. This can only be achieved through a co-creation process including Quadruple Helix stakeholders from the early stages by engaging them and taking account of their different views, knowledges, and interests on an issue that is important for all of them. In the case of Nordland, the issue being focussed on is the region’s coast and the management thereof.

The involvement of these different stakeholders requires a precise mapping of the territory to identify them, achieved through locally organised workshops. These workshops were also used to co-develop and co-define the different scenarios considered during the co-creation of the regional planning strategy.

Four potential scenarios came out of this process:

For her, the Nordland-SeeRRI case illustrates the first result of a co-creation process that forms a regional actor network and knowledge platform. The recipe for it would be a compelling mission, the right stakeholders, a creative process and the possibility to leverage all of it. She believes that it can be adapted to other territories, as Catalonia and Lower Austria have also applied the same process in SeeRRI.

When asked whether she thinks co-creation could be useful in the implementation of S3s, Nhien replied that co-creation is an important element in S3 as it is crucial to bring together key actors in the regions to make the plan for their own future

Our two panellists then reacted to the presentation of the Nordland case by presenting their own views and experiences on the matter. Our first panellist, Tamás Gyulai of Darinno (the Regional Development Agency of the South Great Plains in Hungary), presented different initiatives that his team is involved in, leading the way for transregional co-creation planning. It was also stressed that involving citizens is key in these types of projects. Alessandro Deserti, from his experience on co-creation for RRI, stressed that it is not enough to do problem setting from the beginning since stakeholders and their representatives change over time. It is thus important that they accompany the co-creation process over a longer period.