The Region of Central Macedonia adopts the Gender Equality Plan 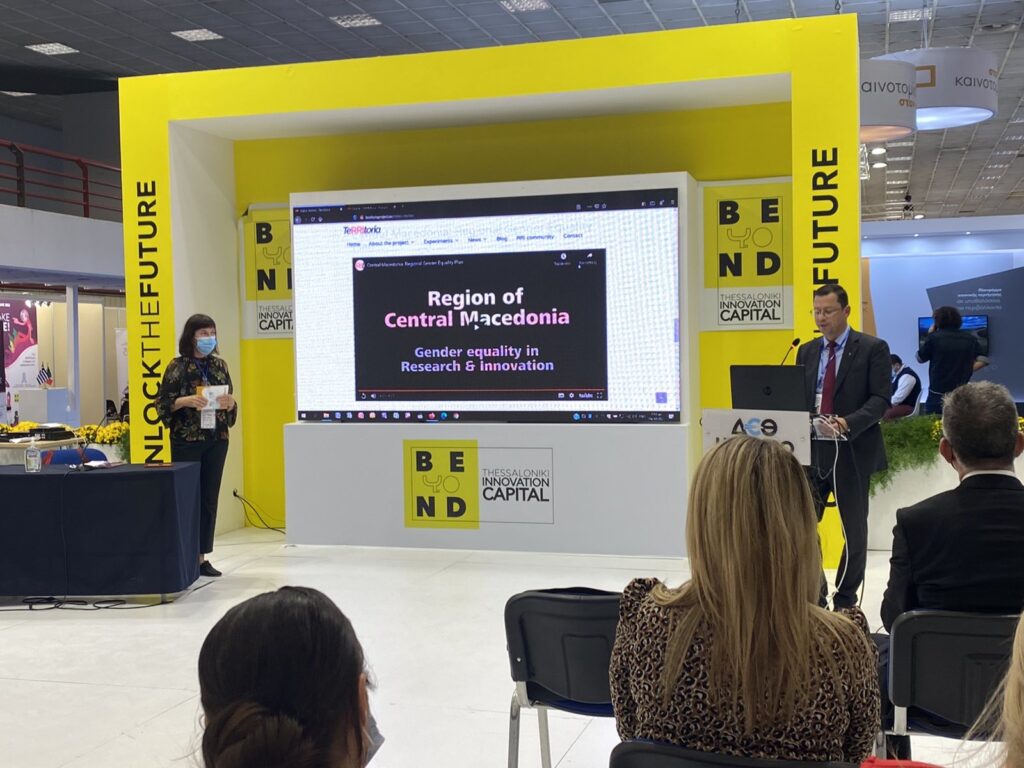 The Region of Central Macedonia adopts the Gender Equality Plan

The Region of Central Macedonia, in collaboration with the Southeast European Research Center, presented the “Gender Equality Plan for the Research and Innovation Field in the Region of Central Macedonia” at the Open Social Innovation Event Beyond 4.0, the first significant exhibition of Innovation and Technology held in Thessaloniki, on Thursday, October 14, 2021. The Gender Equality Plan was co-created in the European project “TeRRItoria” framework and sought to link responsible research and innovation with the smart specialization strategy.

The event was opened with Mr. Michailidis Konstantinos, Head of Directorate of Innovation & Entrepreneurship in the Region of Central Macedonia. Mr. Michailidis, presented the main points and objectives of the Gender Equality Plan in Research and Innovation, noting, at the same time, that the Region of Central Macedonia and the Regional Governor Mr. Apostolos Tzitzikostas support the position of women in all of the economic, social, political and cultural sectors of Greece and our Region.

More specifically, Mr. Michailidis, based on the Gender Report of the European Social Committee, presented data that show that women, even today, in the 21st century, are still the majority of economically inactive people, more vulnerable to poverty, social exclusion and violence. In particular, he referred to the low representation of women both in the Natural Sciences, Technology, Engineering and Mathematics and the higher levels of management of Research & Innovation, Αcademia and Ιndustry.

Afterwards, Mr. Nikos Zacharis, Director of the Southeast European Research Center (SEERC), in addition to his greeting, stressed that in times of crisis like the one we are going through, the principle of gender equality is not a luxury but a key component of social and economic policy. Furthermore, he stressed that the Gender Equality Plan for Research and Innovation Field in RCM, with the appropriate adjustments, can be quickly adopted by other bodies and companies and be a lever for an equitable economic and social development free of gender inequalities, utilizing the most appropriate way all human resources on equal terms.

The pillars of the Gender Equality Plan and all the detailed steps followed to achieve the program’s primary objectives were presented by Professor George Eleftherakis of the Southeast European Research Center (SEERC). Mapping was one of the primary steps, as characteristics based on three main pillars: the RCM Research and Innovation ecosystem, the analysis of the local environment and stakeholders and the examination of the conditions for gender equality in Research and Innovation in Greece. The presentation highlighted the positive impact that the co-planning had on the shaping of the Plan and the significant contribution of the representatives of both the academic and research community, the industry, and the political and social scene of the place. The strategic areas of reference of the Plan are the advancement of women’s careers, the scientific information on gender issues, the confrontation of social and cultural stereotypes, the promotion of female role models, the gender-neutral institutional communication, the balance between professional and sexual harassment and sexual violence and raising public awareness of gender equality.

The strengthening of the role of women in the field of Informatics and Technology was touched upon, during the event, by Ms. Eleni Margariti, member of the board of ΙT Business Association of Nothern Greece and Administration Management of Consortis Geospatial. In the context of outlining the work landscape in the field of technology and information, he stated that women are under-represented in the field and, at the same time, are less likely to pursue relevant studies, which is due to several factors and contradicts the high training of women in above areas.

With her very detailed presentation, Ms. Dimitra Kogkidou, professor at the Aristotle University of Thessaloniki and chair of the Gender Equality Committee at AUTh, expressed the need to accelerate Greece’s progress towards achieving substantial gender equality. He said that Greece is in 98th place in the Equality of Friends between 156 Countries based on numbers and studies. He emphasized that even at the European Union level, according to the European Institute for Gender Equality (EIGE), no Member State had achieved full gender equality and that progress was being made very slowly. Finally, he stressed that the pandemic could significantly impact gender equality, thus erasing 25 years of progress.

The discussion was coordinated by the Head of the Department of European Programs & Synergies, Ms. Kallitsa Pantazi. Essential conclusions were drawn about the pandemic how it affected the position of women at work, and details were given about the rest of the project. The event attended representatives from the Greek Association of Women Entrepreneurs, the Labor Institute of the Greek Trade Union, the Thessaloniki Chamber of Commerce and Industry, the Geotechnical Chamber, the Municipalities of Kalamaria, Visaltia and Alexandria, the Gender Equality Committee of the Region of Central Macedonia and the Regional ombudsman of citizens and enterprises.